The Book of Lost Tales, Part One: J.R.R.Tolkien, First Published in 1983 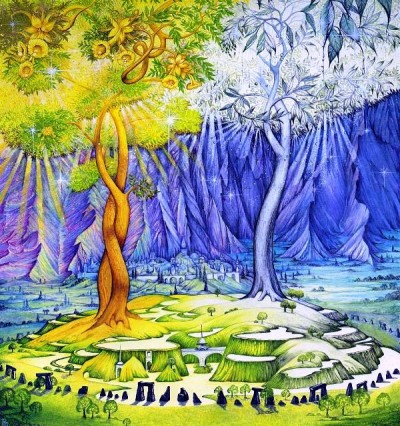 The Trees of Valinor.
© Roger Garland.
Click on image to enlarge.

The Book of Lost Tales: Volume 1 contains versions of ten of the original legends of Valinor...the Undying Lands to the Uttermost West of Middle-earth. This volume is full of mythic detail and it is a difficult read. You see a lot Christopher Tolkien's editing (by necessity) in this book rather than his father's splendid narrative. On the other hand, it is required reading for those interested in understanding Tolkien's creative process.

Volume 1 contains the tale of the birth of the Two Trees.

Volume 1 tells the story of the coming of the Elves to Valinor and the flight of the Noldor into exile.

Volume 1 contains the narrative of the making of the sun and the moon, described here in fuller form than anywhere else in Tolkien's writings.