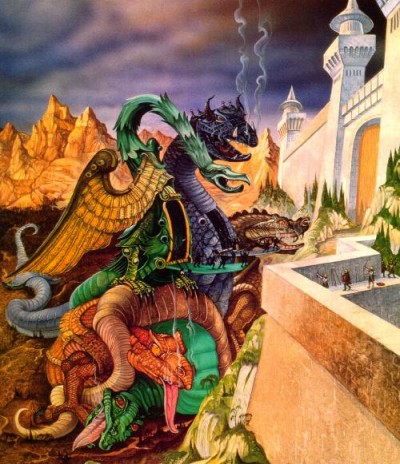 The Fall of Gondolin.
© Roger Garland.
Click on image to enlarge.

The Book of Lost Tales: Volume 2 contains narratives set in Beleriand during the First Age. This volume is full of mythic detail and it is a difficult read. You see a lot Christopher Tolkien's editing (by necessity) in this book rather than his father's splendid narrative. On the other hand, it is required reading for those interested in understanding Tolkien's creative process.

Volume 2 contains early versions of the tales of Turin and the Dragon, and the necklace of the Dwarves.

Volume 2 tells the story of The Fall of Gondolin, the fairest of all the Elven cities in Middle-earth. Gondolin was also called the Hidden Kingdom.

Volume 2 is most important to the followers of the story of Aragorn, son of Arathorn and his love for Arwen, daughter of Elrond, for it tells for the first time the Tale of Beren and Luthien.