The War of the Ring: J.R.R.Tolkien & Christopher Tolkien, First Published in 1990 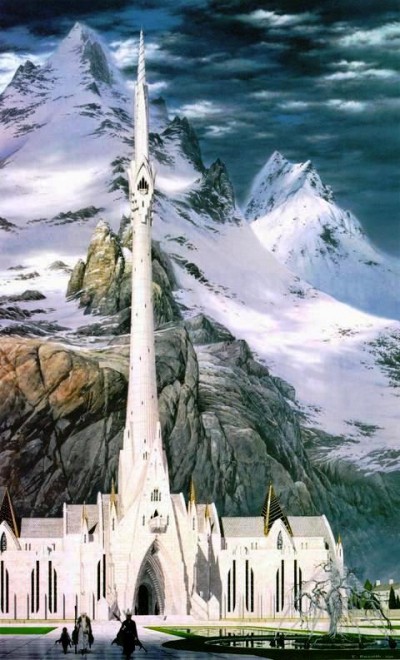 At the Court of the Fountain.
© Ted Nasmith.
Click on image to enlarge.

A new character has come on the scene (I am sure I did not invent him, I did not even want him, though I like him, but there he came walking into the woods of Ithilien): Faramir, the brother of Boromir...

The War of the Ring is the eighth volume of The History of Middle-earth and it begins where The Treason of Isengard leaves off. It continues the narrative and notes of J.R.R.Tolkien's classic story of The Lord of the Rings as it races towards its climactic conclusion. Edited by Tolkien's son, Christopher (as is the entire 12 volume series), this volume is highlighted by writings on the eventual overthrow of the Wizard, Saruman, and the destruction of his fortress at Orthanc.

The notes and transcripts continue to follow the treacherous route taken by Frodo Baggins and Sam Gamgee in their quest to destroy the One Ring. We are also treated to the material that covers the final great battles that govern the fate of our beloved characters, as well as all of the inhabitants of Middle-earth.

♦ In the first renderings of The Fall of Saruman, the palantir that is so crucial to the fate of Aragorn and Frodo actually breaks as it tumbles down the stairs at Orthanc. What would have been the fate of Middle-earth had Tolkien not changed the outcome of this tumble?

♦ Volume eight contains more original maps and drawings that add immensely to the reader's ability to grasp the detail of the subject matter.

♦ It is in The War of the Ring where we see that Tolkien actually wrote of the death of Eowyn.

♦ Here, also, we see that Denethor, the Steward of Gondor, was not originally planned to die in the burning pyre at Minas Tirith. Instead, it was planned that he come out from the city after the Battle of the Pelennor Fields and challenge Aragorn for the right to sit on the throne of Gondor. Perhaps the plot was a bit more tidy with the death of Denethor.