The Saga of the Volsungs: Introduction and Translation by Jesse L. Block, Published in 1990 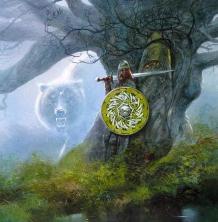 Sword in the Storm.
© John Howe.
Click on image to enlarge.

In Scandanavia, during the centuries after the Middle Ages, knowledge of the Sigurd story never died out among the rural population. Full of supernatural elements, including the schemes of one-eyed Odin, a ring of power, and the sword that was reforged, the tale was kept alive in oral tradition. In the nineteenth century as the Volsung story was discovered by the growing urban readership, it became widely known throughout Europe. Translated into many languages, it became a primary source for writers of fantasy, and for those interested in oral legends of historical events and the mythic past of northern Europe. The saga deeply influenced William Morris in the nineteenth century and J.R.R.Tolkien in the twentieth.

--Jesse L. Byock,
Introduction to The Saga of the Volsungs

The Saga of the Volsungs is a collection of what began as oral tales from Nordic mythology. They are brimming full of heroes, villains, blood lust, intrigues, murder, supernatural powers and much more. Rest assured, this is not Mary Poppins. Reading these tales, however, will leave no doubt in your mind that they were the foundations of Tolkien's stories. They weave a rich tapestry illuminating the Norse culture and heroic archetypes. The book gives the reader a solid basis for understanding the structure of Tolkien's world.

While you meet many colorful and amazing characters in these sagas, it is Sigurd the Dragon Slayer who will immediately capture the interest of the Tolkien fan. Rings, swords, and golden hoards abound. You will glimpse, ever so briefly, some of your favorite characters in these tales. There are shield-maidens, foster fathers, gods and goddesses, kings and queens, and heroic horses. Sound familiar?

Regin Forges Gram: Regin, the foster father of Sigurd, forges the sword Gram for him.

The Conversation Between Sigurd and Brynhild; Sigurd pledges to marry Brynhild and gives her a gold ring. Oh goodness...not another ring!

Helgi Marries Sigrun: Here you read about the shield-maiden named Sigrun. Looks like the girls had some spunk, even way back then.