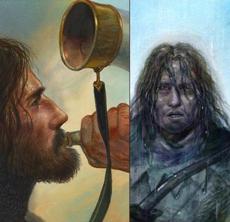 Boromir and Faramir.
© John Howe.
Click on image to enlarge.

By separating the impulse to seek the light from the tendency to turn away from it (both typical of humankind in the real world), Tolkien is able to use Elves and Men to place each action in sharp focus and develop the possibilities inherent to each. For each is a powerful force and both are to be seen as simultaneously at work in his Secondary World, just as they are in the Primary one. In addition, by crossing and re-crossing the paths of Elves and Men, Tolkien develops fully the interaction of dark and light as necessary elements of the pattern potentiated in the Music.

--Light Out of Darkness,
Splintered Light

Splintered Light by Verlyn Flieger, was first published in 1983. This updated edition is "a classic study of Tolkien's The Silmarillion and The Lord of the Rings in light of Owen Barfield's linguistic theory of the fragmentation of meaning. Flieger demonstrates Tolkien's use of Barfield's concept throughout his fiction, showing how his central image of primary light splintered and refracted acts as a metaphor for the languages, peoples, and history of Middle-earth."

♦ Dyscatastrophe: The discussion of two Tolkien essays, Beowulf; The Monsters and the Critics, and On Fairy-stories in relation to "dyscatastrophe", or sorrow and failure.

♦ Eucatastrophe: Again Tolkien's writings are discussed in relation to "eucatastrophe", "a seeming disaster with a joyous ending." Ever wonder where the concept of "and they lived happily ever after" came from? Read on.

♦ Beren and Thingol: Flieger discusses these two major Tolkien characters and the their fates being determined as much, if not more, by their motives, rather than their actions or results.

♦ One Good Custom: Flieger finishes his book by discussing Tolkiens themes of inevitability, the absolute necessity of change, and the "centrality" of language, weaving together both the darkness and light in Middle-earth.