The Peoples of Middle-earth: J.R.R.Tolkien & Christopher Tolkien, First Published in 1996 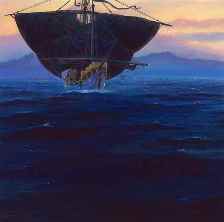 He halted in the narrow passage that ran through the house, and it seemed that he was wrapped in a blackness; not a glimmer of twilight of the world outside remained there. Suddenly he smelt it, or so it seemed, though it came as it were from within outwards to the sense: he smelt the old Evil and knew it for what it was.

--The New Shadow,
The Peoples of Middle-earth

The Peoples of Middle-earth is the twelfth, and last, volume of The History of Middle-earth and it is truly enlightening in that Christopher Tolkien has gathered together the essays and records to illustrate the comprehensive work that his father had put into writing the appendices to The Lord of the Rings. J.R.R.Tolkien had great difficulty in completing the appendices, indeed "bordering on despair." The actual publication of the The Return of the King was delayed until he could complete this detailed background work on the Second and Third Ages.

Also included in this last volume are two works begun and abandoned by Tolkien in his later years. Both of these short works are captivating but it is the chapter, The New Shadow, that shows the reader what might have been. Again, this short piece alone is worth the price of the book.

♦ Did you know that Tolkien had actually started a sequel to The Lord of the Rings? The very short text included in the chapter, The New Shadow, is vintage Tolkien at his best. As a reader, you will feel the exact emotions reading this brief beginning as when you came upon that first Black Rider so long ago in the Shire. Even in his last years, Tolkien knew full well how to grab your attention and rivet you to a book.