The Adventures Of Tom Bombadil: J.R.R.Tolkien, First Published in 1978 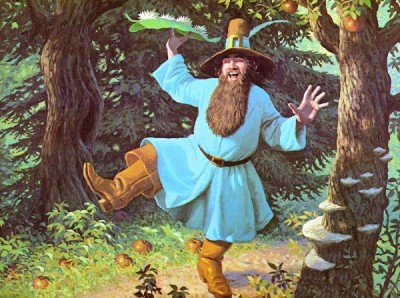 Tom Bombadil.
© The Brothers Hildebrandt.
Click on image to enlarge.

The present selection is taken from the older pieces, mainly concerned
with legends & jest of the Shire at the end of the Third Age,
that appear to have been made by Hobbits,
especially by Bilbo and his friends,
or their immediate descendents.

This is a collection of poems from the literary heritage of the Hobbits, The Red Book of Westmarch, as collected by Bilbo, Frodo, Sam, and friends. Authorship of particular poems is variously attributed directly to named Hobbits, along with suggested lineages that go back even to Gondor.

The first two poems are about Tom Bombadil and his many adventures, including his wooing of Goldberry. Thereafter the subject matter is highly varied: The Man in the Moon, Bilbo's trolls, Sam's oliphaunt, a dragon's hoard, and even cats. Some of the poems have a strong Elvish influence, dealing with such ethereal subjects as fairy princesses and shadow brides. The Sea is also a recurring theme.

Readers of The Hobbit and The Lord of the Rings will find familiar works. We may remember Sam declaiming in Ithilien:

...and Frodo's disastrous recitation of "The Man in the Moon" at the Prancing Pony in Bree.

The collection closes with the poignant "The Last Ship" which tells of Firiel, a mortal maiden, who is invited to board the last ship sailing to the West. As a mortal she cannot board, and simply watches the ship sail on. The final verse echoes with the sense of loss at the passing of the Elves from Middle-earth:


Year still after year flows
down the Seven Rivers;
Clouds pass, sunlight glows,
reed and willow quivers
At morn and eve, but never more
westward ships have waded
In mortal waters as before
and their song has faded.

Anyone who enjoys the poetry in The Lord of the Rings will enjoy this simple but typically wonderful Tolkien collection.