The Shaping of Middle-earth: J.R.R.Tolkien, First Published in 1986 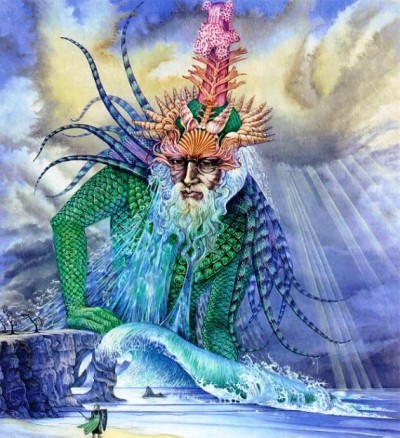 Then the magic drifted from me and that music loosed its bands-
Far, far-off, conches calling-lo! I stood in the sweet lands,
And the meadows were about me where the weeping willows grew,
Where the long grass stirred beside me, and my feet were drenched with dew.
Only the reeds were rustling, but a mist lay on the streams
Like a sea-roke drawn far inland, like a shred of salt sea-dreams.
'Twas in the Land of Willows that I heard th'unfathomed breath
Of the Horns of Ylmir calling-and shall hear them till my death.

--The Song of Tuor

The Shaping of Middle-earth is the fourth volume of The History of Middle-earth and it consists of the early renditions of Tolkien's first narrations, from the creation myth to the fall of Morgoth. This is an all inclusive volume where Christopher Tolkien has compiled timelines, maps, prose and poetry to thoroughly educate the reader on the thought processes that created Middle-earth. It is a fascinating reference piece for those seeking total immersion in, and understanding of, the detailed world created by J.R.R.Tolkien.

The Earliest Silmarillion and The First "Silmarillion" Map: It is said that Tolkien designed his maps of the different ages of Middle-earth before he ever wrote his narratives. He understood that his readers would never comprehend the complexities of his stories without maps as reference points. Here, we have the first of his maps and charts of Middle-earth.

The Quenta: This commentary contains, among other things, the extraordinary poem, The Horns of Ylmir. In it is the wonderfully lyrical Song of Tuor. This marvelous piece alone is worth the price of the book.

The Earliest Annals of Valinor and The Earliest Annals of Beleriand: J.R.R.Tolkien was a master at telling his stories through the words of his characters. Here is a grand example of this technique as the annals were "written by Pengolod the Wise of Gondolin, before its fall, and after at Sirion's Haven, and at Tavrobel in Tol Eressea after his return unto the West, and there seen and translated by Eriol of Leithien, that is Ælfwine of the Angelcynn." This is also glorious reading.