The War of the Jewels: J.R.R.Tolkien & Christopher Tolkien, First Published in 1995 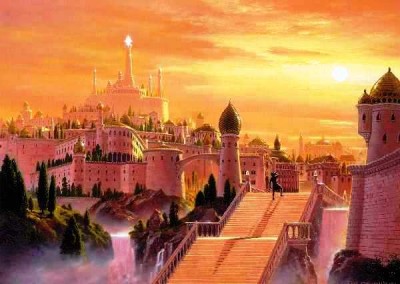 But Lúthien went to Menegroth and healed the winter of Thingol
with the touch of her hand; yet Melian looked in her eyes
and read the doom that was written there, and turned away:
for she knew that a parting beyond the end of the World
had come between them, and no grief of loss hath been heavier
than the grief of the heart of Melian Maia in that hour
(unless only it were the grief of Elrond and Arwen).

The War of the Jewels is the eleventh volume of The History of Middle-earth series, and the second installment of the two volumes dealing with the writings of The Silmarillion. It concludes what its predecessor, Morgoth's Ring, began. Like volume ten, it illustrates the evolution and transformation of the legendary History of the Eldar Days - The First Age into its final form.

The War of the Jewels picks up where Morgoth's Ring left off. It turns to Middle-earth, and describes the fateful conflict of the High Elves and Men against the power of the Dark Lord.

♦ The War of the Jewels includes the entire saga of Túrin Turambar and his sister Niënor, the offsprings of Húrin the Steadfast, who brought disaster to the forest people of Brethil when he came among them after his release from his long captivity in Angband.

♦ The War of the Jewels also includes the unfinished text of the Grey Annals. the primary source of material for The War of the Jewels, and an extensive and very interesting essay on the origins and meanings of Elvish words, the Dwarves gestural language, and on the relations of all the peoples of Middle-earth.

♦ Finally, The War of the Jewels also contains detailed maps of Beleriand in their final stage.