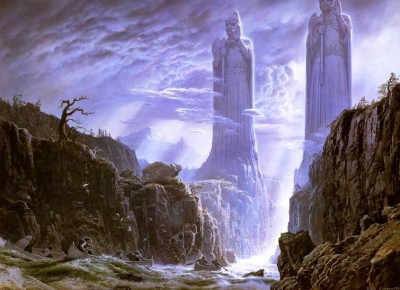 Tolkien was not only a gifted writer of character, plot, and description; he was also a consummate mythmaker. At its most elemental level, myth embodies basic human ideals and expresses our deep, commonly felt emotions. The depth and skill with which Tolkien constructs his epic story of the Third Age of Middle-earth lifts it above mere fiction into this larger realm.

--Introduction,
One Ring to Bind Them All, Tolkien's Mythology

In One Ring to Bind Them All, Tolkien's Mythology, author Anne Petty shows that "a folkloric/mythic structure is seen to underlie Tolkien's epic work. The Lord of the Rings is 20th-century mythology manifested in the familiar pattern of the three-stage hero quest made popular by Joseph Campbell - departure, initiation, and return - and in the elemental motifs of folktales...a rich array of reinvented mythic archetypes and icons: the desperate quest (good vs evil); a magical object that embodies or initiates the quest (the ring); the wise wizard who oversees or aids the quest (Gandalf); the reluctant hero, an ordinary person with untapped abilities (Frodo); the hero's loyal friend and supporter (Sam); the warrior king whose true identity is hidden (Strider/Aragorn); and the goddess figure (Galadriel)."

♦ Departure: In this part of the book Petty shows, among other things, how The Hobbit "sets up" the plot and story of The Lord of the Rings, and introduces the concept of "the Three Heroes" - Gandalf, Frodo, and Aragorn.

♦ Initiation: Here Petty discusses Campbell's concept of "The Road of Trials" in relationship to the Three Heroes. This section concludes with a fascinating discussion of the notion of "binary opposition" as it applies to Tolkien's plots and characters in Middle-earth.

♦ Return: Has it occurred to you that the Fellowship left Rivendell on the quest for the Ring in October, and a very short one year later "this original group tarries in Rivendell until October", before returning to the Shire? "The quest is completed, the tale has come full circle, and the desire of the psyche for unity and wholeness, the sense of completion, is satisfied once more."