The Fiction of J.R.R.Tolkien, Master of Middle-earth: Paul H. Kocher, First Published in 1972 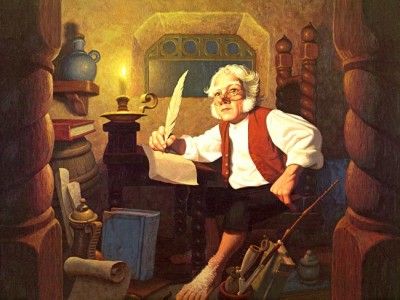 Bilbo.
© The Brothers Hildebrandt.
Click on image to enlarge.

"Much has been written, and justly, about the self-sacrificial courage of Frodo and Sam in the last stages of their journey through Mordor. But few or none have remarked on the equal if less solitary unselfish daring displayed by the mere seven thousand men whom Aragorn and his peers lead up to the Black Gate to challenge the ten times ten thousand inside."

from the chapter Aragorn,
The Fiction of J.R.R.Tolkien, Master of Middle-earth

The Fiction ofJ.R.R.Tolkien, Master of Middle-earth by Paul H. Kocher, was first published in 1972, and has, until just recently, been out of print. It has just recently been re-published by Ballantine Books and represents a unique study of Tolkien's work.

In The Fiction ofJ.R.R.Tolkien, Master of Middle-earth, Kocher " examines the sources that Tolkien drew upon in fashioning Middle-earth and its inhabitants - and provides valuable insights into the author's aims and methods."

♦ Find out why Aragorn is the most misunderstood character in The Lord of the Rings, and why he is its true hero.

♦ Learn about the origin of Sauron and learn the nature of evil in Tolkien's vast mythological world.

♦ Learn about the opposing forces of destiny and free will in Frodo's quest.

♦ Study the Cosmology of Middle-earth - is it our world at an earlier time, or is it merely an extraordinary "elsewhere."

♦ Read how Tolkien's own ideas about morality, religion, and social order are the basis of every aspect of his life's work.